“So that the story doesn’t end.” XI Elisabeth Cross Procession 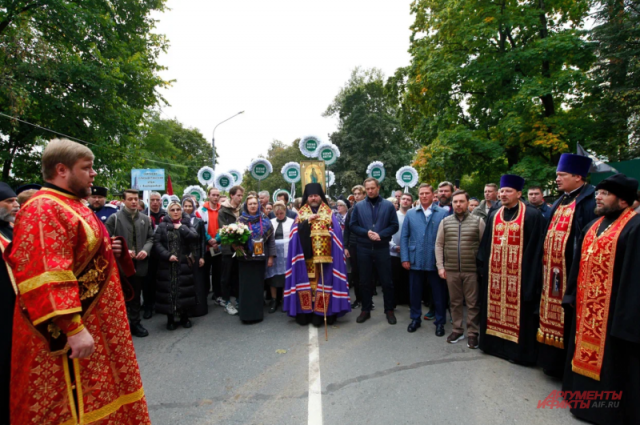 Three thousand pilgrims from Russia and abroad took part in the annual, eleventh in a row, Elizabethan procession.

He passed in Krasnogorsk district of the Moscow region in  historical Imperial estate “Ilyinskoye-Usovo”. In two hours the crusaders passed from the village of Ilyinskoye to the village of Usovo, crossing the Moskva River. Some did it on rafts, others — by a specially constructed pontoon ferry.

"We easily, joyfully, prayerfully, with hope for great and bright future of our country have passed this way, — said Anna Gromova, one of the inspirers of the Elisabeth Religious Procession and Chairman of the Supervisory Board of the Elisabeth-Sergius Educational Society” Foundation. — We multiplyed the tradition founded by Grand Duchess Elisaveta Feodorovna, the mistress of this estate, who celebrated her name day on September 18, on the day of memory of her heavenly patron saint, the righteous Elizabeth, mother of John the Baptist. On that day, all the surrounding residents gathered in Ilyinsky Church, and after that the procession was performed. For the third year in a row, the procession is led by a bishop — this time it was Bishop Thomas of Odintsovo and Krasnogorsk. The current Elizabethan procession is timed to important date — To the 30th Anniversary of the Glorification in the Host of the New Martyrs of the Russian Holy Martyrs Grand Duchess Elisaveta Feodorovna and Cross Sister Barbaraand on 150th Anniversary&nbsp ;birthday of Holy Royal Passion-bearer Empress Alexandra Feodorovna. As you know, these saints were sisters and before they got married and left to Russia, they bore the titles of Hessian princesses.

«Elisaveta Feodorovna at one time left the palaces and came to those who needed her help, — recalled Anna Gromova.   She came to the infirmary for wounded soldiers of the Russo-Japanese War (we now have a Red Cross Museum), she came to peasant children and took charge of the folk school for children in Usovo village. She came to the maternity hospital so that the peasant women would safely give birth to healthy children here. This hospital was in demand until the 70s. of the last century». Requiem service on the banks of the Moscow River

After crossing the Moscow River Bishop Thomaswith the clergy served a memorial service for all the innocent victims of the years of persecution of the Church (Elisaveta Feodorovna herself was shot by the Bolsheviks and thrown into a mine, her sister Empress Alexandra Feodorovna was killed along with Emperor Nicholas II strong>  and            of all who laid down their lives for their friends, for all those soldiers who fought and died in various conflicts and now during during a special military operation.           we are trying to preserve the historical memory so that the history doesn end with       said Anna Gromova. — So that the children who come after memorize this prayer, so that they keep this tradition. The tradition of serving the Fatherland, love for your Motherland. And the most important thing is that they keep love in their heart. Love for one's neighbors, love, compassion, forgiveness and  patience».

There were many children among the crusaders. 11-year-old Elena was walking next to the aif.ru correspondenttogether with mom Olga. This is her second Elizabethan procession. “Actually, I don't like to walk a lot, but last year two hours flew by like one second. And now it's very easy to go with prayer, — the girl confessed. —  I pray that my friend Oleg, he is 10 , will get his sight back. He has health problems. We used to run with in the yard. Now he sick. I feel very sorry for him. Olga's mother, according to her says, prays for those who are now at the front line and protecting our Motherland from Nazism. On the religious procession, mother and daughter came from Palekh. They are parishioners of the temple in honor of the Grand Duchess Elisaveta Feodorovna, who is known for helping the wounded in the Russian-Japanese War a lot. She stood at the origins of the Russian Red Cross, which will turn 155 this year. In 1905 while receiving wounded soldiers in Moscow, she turned to Muscovites for help    as a result        , thousands (!) of Moscow families received our soldiers who needed rehabilitation at home after a hospital stay. treatment. At the end of the procession in the village of Usovo, a prayer service was served in the Church of the Savior Not Made by Hands. After that, a charity event “White Flower” took place on the square in front of the Spassky Church. (with the support of the Administration of the Odintsovo City District, the World Russian People's Council and the  Association of Philanthropists "White Flower"), the funds from which will be used to help seriously ill children of the Odintsovo and Krasnogorsk city districts.

All the pilgrims, and there were about three thousand of them, were hospitably treated by the organizers in the field kitchen. On the eve of several days for such a number of guests, local chefs prepared meatballs. Together with hot buckwheat and tea from samovars, they bolstered the strength of the participants of the event to give them the opportunity to get acquainted with the movable poster exhibition ““I Feel Like a Mother of This Country…”. The Christian Feat of the Holy Royal Passion-Bearer Empress Alexandra Feodorovna”, prepared by the ESPO Foundation for the  150th anniversary of the birth of the last Russian Empress.

The final chord of the festive day was the performance of the Moscow Synodal Choir under the direction of Honored Artist of Russia Alexey Puzakov. 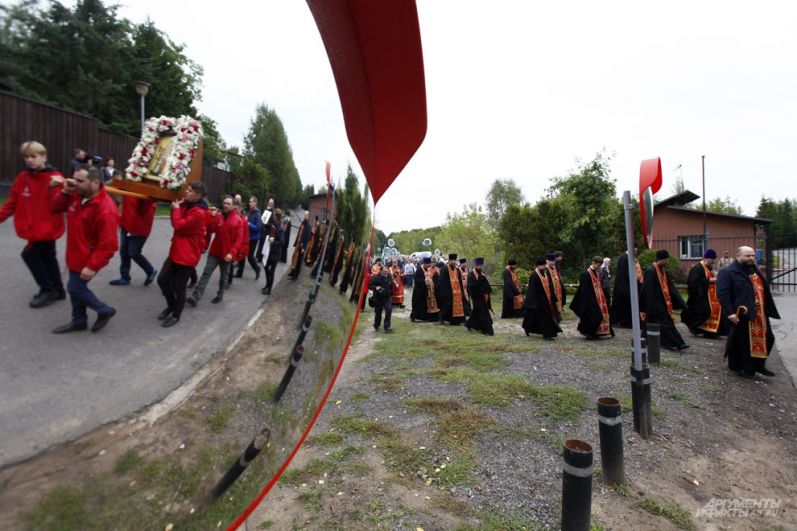 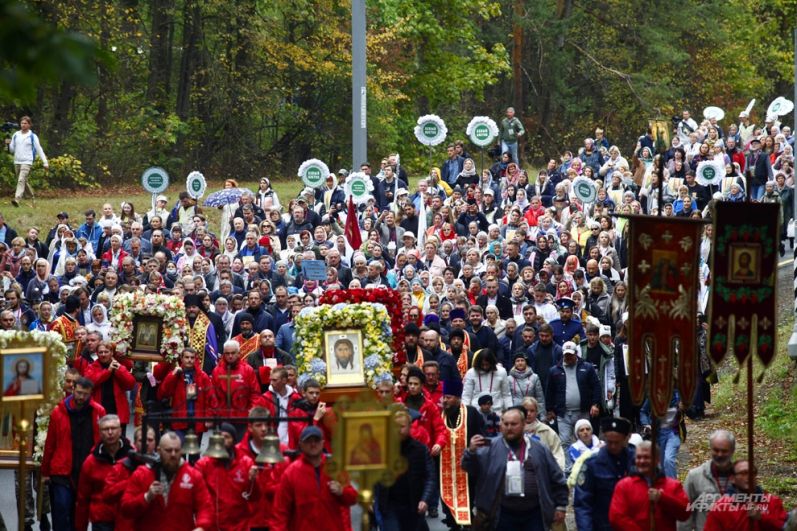 At the end of the procession, the performance of the Moscow Synodal Choir under the direction of the Honored Artist of Russia Alexei Puzakov took place. © AiF/Igor Kharitonov